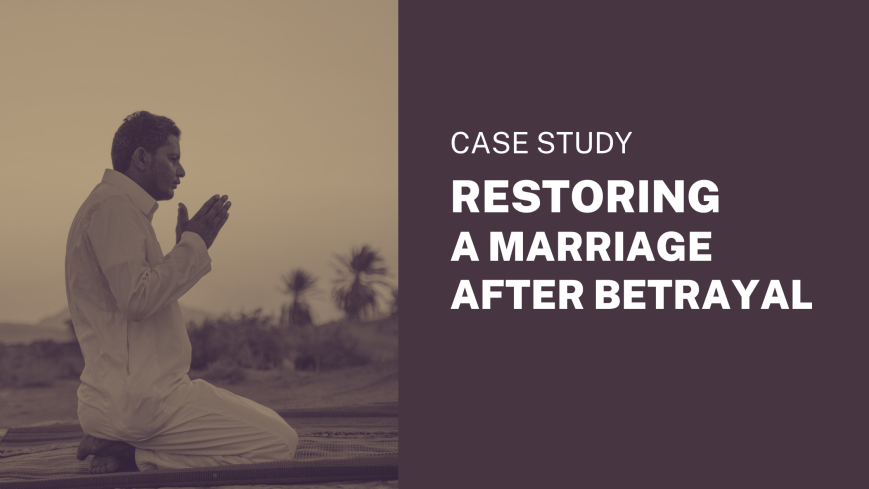 No matter how far you’ve gone the wrong way, you can always turn around and come back. But Sameer didn’t know how to turn back.

Sameer broke down crying as we sat down to speak. After he had found some composure I asked him to relay to me what had happened that motivated him to reach out to me.

“I broke my wife. Absolutely destroyed her. Wallahi Wallahi Wallahi if I could think of anybody that didn’t deserve what I’ve put her through with my nasty actions it is her. She would wake up and make me breakfast almost every morning before work. On several days she wouldn’t eat lunch herself JUST so I could eat dinner at night. There would never be an instance where she wouldn’t greet me when I came home from work without a hug and smile, her eyes were always so full of life and happiness and joy. She would express her love to me 24/7.

I ruined her. The only sound that has been playing in my head all week is her screaming “What didn’t I do for you? What didn’t I sacrifice for you?” She has gone back to live with her parents and is currently mulling over the decision of whether to stay with me or not, but even then can’t help but to care for me. All she can ever say to me when she isn’t enraged is, “you broke me. wallahi you broke me.” “why did you marry me if you didn’t deserve me?”

How did he get to this place?

His wife had discovered suspicious charges on his credit card statement and upon some research, she was shocked to discover the charges were for massage parlors. Completely broken and devastated, she told Sameer that she was going back to live with her parents and was contemplating leaving him.

This shocking revelation put Sameer in a place of panic and damage control, where he pleaded with his wife to allow themselves to at least speak with a therapist together before she took action to leave him.

The therapist they visited tried to give him the benefit of the doubt and at least carve out the possibility that these were isolated incidents from him and nothing more. She repeatedly asked him again and again, “Had there been any sexual releases at the massage parlors?”

Afraid of the consequences that would come with the truth, Sameer would vehemently deny and swear by God that nothing of that sort had happened.

The only problem was it had happened.

I told Sameer, “You’ve been here in this place of pain, perhaps not the same exact circumstances, but you’ve been here many times before. Why are you really here speaking with me now? What is it that you are looking for? You want for things to be better, but what does that mean…that your wife doesn’t leave you? That your life as you know it is not ruined? Why are you here?

Sameer you need to start telling the truth, the whole raw truth.”

And that is the moment where I helped Sameer finally embrace his brokenness.

To begin the process of purification from his unwanted sexual behaviors, Sameer would have to first take full responsibility for his actions and be ready to face whatever the painful and devastating consequences were of his choices.

No matter how difficult, stepping fully into the truth was a necessary rite of passage that needed to happen.

I asked him, “Why was it that you want to recover and do good? Was it because you are in a lot of pain? Do you just want to convince your wife that you are going to change so she does not leave you? Why is it that you really want to change?

What happens if your wife does leave you, will you and I be speaking or working together again? You’ve got to be honest.”

And he did answer honestly, “You know Zeyad, a big part of me I admit is because I don’t want my wife to leave me.”

There was a pause and then he added,

“I’m also tired of this lifestyle, the secrets, the lies I’ve been telling. I want to be clean.”

I asked him another question,

“What happens when this period of pain or craziness quiets down? Are you going to go back to the same cycle again?”

Even though Sameer was torn about his wife leaving him, and felt stuck within the shock he was facing, he needed to really dig deep in his intentions beyond present circumstances to sustain him through the difficulties that he would be facing.

In the conversation Sameer and I had that day, I invited him to consider that his problems with sex were not about sex and went deeper than that. Sex had become a dependence, a coping mechanism, and an anchor for his life.

Sex was a metaphor of how he had learned to deal with the highs and lows of his life. It was what he turned to numb out and escape from the emptiness and voids from within that he felt.

Sameer had to be broken, so he could dig really deep because what we were talking about was not just about coming clean from unwanted sexual behaviors.

Ultimately, his current life had to break down so he could build himself and his life back upon a much stronger and fulfilling anchor.

That evening, Sameer turned back. He saw the trail of destruction he had created behind him. It was devastating, but he continued to walk feeling for the first time in his life that there was hope, because, for the first time, he wasn’t running away.