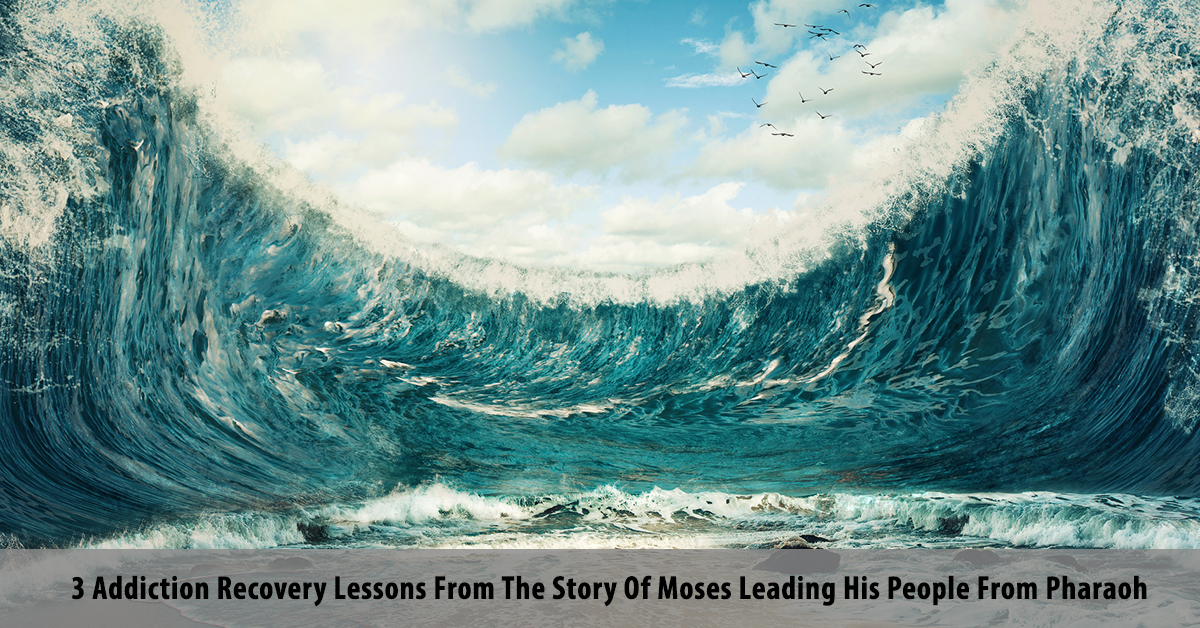 The Day Of Ashura is a special day for Muslims where we are encouraged to fast the 9th and 10th day of Muharram as a commemoration of the saving of the Prophet Musa (may God’s peace and blessings be upon him) and the Children of Israel from the oppression and harm of Pharaoh and his army.

Here are three relevant lessons for those in recovery from addiction to take away from this momentous time in history.

1. God Will Never Abandon The One Who Is Following His Commandment

I want you to imagine this scene…

There are thousands of unarmed people: women, elderly, and children. Prophet Musa (may God’s peace and blessings be upon him) was given the commandment from God to lead the Children of Israel towards the Red Sea.

His people saw the Red Sea on one side and approaching them from the other side was the army of Pharaoh with their chariots, their horses, and their weapons.

What this looks like either way is either death by drowning or being slaughtered mercily by sword.

This is why their natural response was as we know in the Qur’an, 26:61:

And when the two companies saw one another, the companions of Moses said, “Indeed, we are to be overtaken!”

Musa’s response to them at this moment was very profound where he (may God’s peace and blessings be upon him) said in Qur’an, 26:62:

Prophet Musa (may God’s peace and blessings be upon him) was actually commanded by God to take his people to that location by the Red Sea to flee from Pharaoh instead of traveling north towards towards Sinai and then towards Palestine. If God commanded him to take his people there, then God would not abandon him nor his people.

In the Purify Your Gaze Program, we liken the inner addict, which constantly urges one who is addicted to turn and self-medicate through their drug, to the oppressive nature of Pharaoh. The inner addict brings oppression and harm to one’s self and to others, and brings enslavement.

When it comes to overcoming one’s addiction, there are a series of really difficult choices one must make and manage; choices that seemingly put one in the same situation the Children of Israel were in where they were surrounded by the Red Sea and the encroachment of Pharaoh and his army. These choices are difficult, but they are the right choice and so long as one is making the right choice to please God, God will never abandon them.

For example, a married man with years of hiding away his pornography addiction from his spouse and seemingly getting away from it deciding out of his accord to disclose to his wife about his unfaithful ways. Why would anyone out of their right mind do that when it seems that it would lead to death, in this case the death of the relationship?

The why comes down to the intention. The intention of this man and many of our members who decide to break isolation is to come clean and break away from the secrecy, deception and manipulation of the life that they used to lead. For this destructive life to come to an end, a drastic step had to be taken.

Sometimes the only thing that gives reassurance to our members is this deep knowing that God would not abandon them so long as they are taking the right step.

2. Even With Reliance On God To Overcome Our Difficult, We Must Strike With Our Staff

When Musa (may God’s peace and blessings be upon him) came to the Red Sea, if God wanted to, the Red Sea could have already been parted!

Think about it! Is this something difficult for God to have done? Not at all! The lesson for us is we must strike with our staff even though it is God who will cause the seas in our life to part.

The man finally drowns and dies.

When he is met by the angels they ask him, “Why did you not take the help from the helicopter?”

The man responds, “I was waiting for God to save me.”

This is the attitude we often carry in our lives, waiting for something miraculous to happen while we sit around in the observer status.

Even with all the heavy lifting that God will do for us in overcoming the challenges that come our way, even if these are those that are earned by our own wrongdoing, we must be the ones that still strike with the staff.

3. If We Knowingly And Continuously Ignore The Signs, Messages, And Miracles Of God In Our Life Pointing Us To Surrender To Him We Will Face The Same Fate Of Pharaoh

So much so, that he even publicly declared when being told about the need to surrender to God by Musa (may God’s peace and blessings be upon him) that, “I am your greater Lord.”

He continued his ways until life became so unmanageable that he was literally drowning and the Red Sea was collapsing over him. It was at this moment that he tried to say as revealed in the Qur’an, 10:90:

The miracles were right there and clear in front of his eyes but he did not take heed. The lesson from Pharaoh’s ending for all of us is if we are oppressing ourselves or others or transgressing the bounds of God, God wants for us to return back to Him. He will give us warnings, signs and opportunities, but if we ignore them our end will be the same as Pharaoh’s.

We need not wait for something major or a voice from the sky to let us know, “Hey you are screwing up in a major way, stop and turn back.” The signs are there but we have to take heed and respond in the right way.