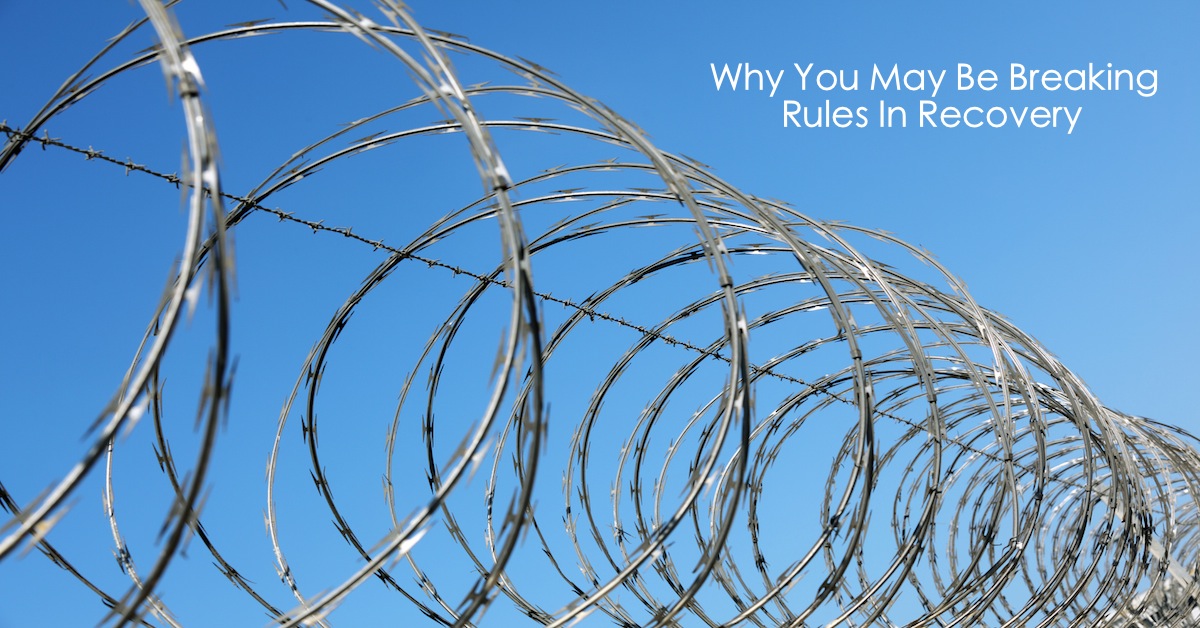 Brother Tariq consistently found himself breaking rules in recovery. For many months in our work together in coaching calls, we would set up filters and boundaries to stop him from engaging in his unwanted sexual behaviors, but he was obsessed in finding loopholes and finding ways to transgress them.

“I have a software that shuts down my Internet at 11 pm for my computer. I can program my computer to shut down by 11:15 pm. But there is a loophole to that. Even if the Internet shuts down by 11, what I can do is that I can load up a lot of cartoons, shows, TV shows, movies and whatever. Just before the time goes out, I’ll have hours of things to watch. Which is why I said 11:15 shut down, but there is a loophole to that. I just close down my laptop, have it sleep, then I’ll open it back up 10-15 minutes past 11:15 pm.“

I shared with brother Tariq that he didn’t have to go to great lengths of getting a Internet blocking software if he was going to constantly game the system.

“I keep shooting myself in the foot. I’m sabotaging my success purposely,” he told me.

What I pointed out to him was that breaking rules provided a rush, a thrill or a high for him. It made the experience of seeking out pornographic material that much more enticing, when he knew he could break rules.

People become addicted to video games because of the challenge that is there, where they look to beat the next level. Similarly, brother Tariq made it harder and harder for himself by setting up filters because it was like a game for him. He wanted to beat it, and then the reward he got at the end of it was pornography.

While on the surface it seems like the dependency or addiction was on pornography, the real dependency was on danger, or thrill seeking. Pornography was just the reward at the end.

Brother Tariq got a thrill out of playing with danger and breaking the rules but at the same time he does not like the fact that he is relapsing and sinning. In situations like this I help my clients see that behind every self-sabotaging behavior is actually a positive intent that is there trying to help us or serve us in some manner.

Instead of planning out more elaborate ways where he could cut off access to the Internet, what if we embraced the fact that he was doing this? What if there was a positive intent behind his consistent breaking of his own rules?

“There’s always a higher intent in whatever patterns of behaviour you feel you are currently stuck in. The answer doesn’t lie in placing more boundaries around yourself, but in embracing the parts of yourself that are trying to meet those needs in the wrong way and changing course!” – Zeyad Ramadan

This is where a lot of insight was born for brother Tariq.

For so long brother Tariq was leading a life where he was living by the rules not out of his own desire but out of tremendous fear of not being accepted or loved by others.

“I want to be who others want me to be,” was what he shared with me when I asked him who he was in our very first coaching session.

He went to medical school solely out of the desire to please his parents. On a subconscious level he was a people pleaser, and wanted to experience love on a high level, but he was afraid that he would lose it if he was authentic and living his own life.

The desire to be authentic and independent was natural, but it had been very much repressed in brother Tariq’s life. He did not have a way to express this need in a big way. He sought that independence when he was rebelling through pornography.

Brother Tariq had a very deep need or desire within him to take an uncharted path, to rebel in a big way, but not necessarily a bad way.

Deep down, he was someone who wanted to live a very bold life. He was looking for a big sense of adventure but that had been suppressed in him for so long because he was simply afraid.

Sometimes, rules are meant to be broken in a system and that is actually a great thing!

In his greatest struggle with his unwanted sexual behaviors, lied a huge opportunity to do something really big for the ummah, whether that be starting a business or organization, traveling to some remote destination, or doing something nobody in his family or community had never done before.

This would allow him to embrace that sense of adventure at the highest level that he sought after through pornography, but it would also align him with his greatest purpose in life.

Brother Tariq could become a trailblazer, where he could potentially be the one paving the path for others.

He had a potential to live life at a very high level, but to reach that breakthrough, he had to embrace the part of himself that wanted to break the rules, the thrills and highs and see how he was meeting these needs in the wrong way.

Often times when people find themselves breaking boundaries or breaking the rules, they think that the answer is setting up more stringent boundaries so they don’t fall back.

There’s always a higher intent in whatever patterns of behaviour you feel you are currently stuck in. The answer doesn’t lie in placing more boundaries around yourself, but in embracing the parts of yourself that are trying to meet those needs in the wrong way and changing course!