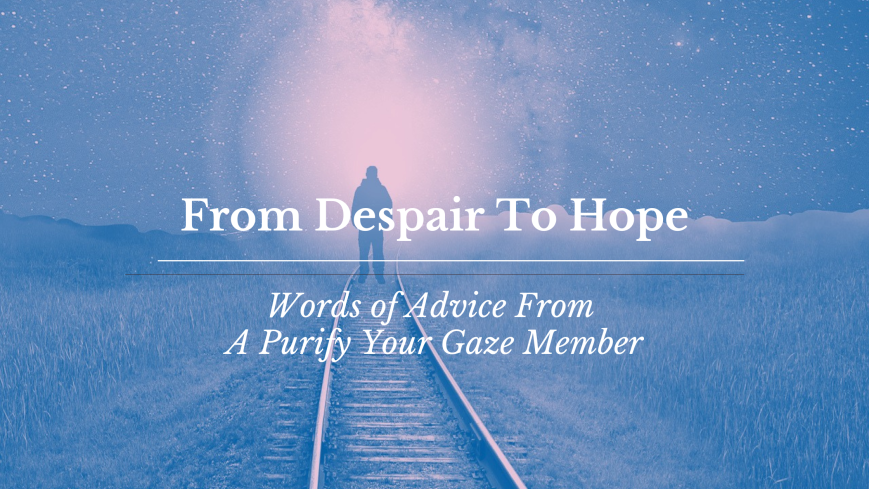 A while back I held a conference call with some of our Purify Your Gaze members and asked them, “Think of yourself the moments where you were afraid, doubtful, worried and anxious before you began your healing and recovery, what did you wish someone could tell you?”

What each member shared really was beautiful and came with strength and conviction from the bottom of their hearts regardless of how far they had come along in their own recovery.

In this post, I wanted to highlight the words of advice shared by a married brother:

Khalil” “Purify Your Gaze Memebr”””]”During my addiction, every time I tried to come out of my addiction, any time I established any type of connection with Allah subhannahu wata’ala, and I’d sit down and make dua and I’d think about the deeds that I’ve done, I just remember feeling so much despair, at the evil things that I’ve done. And that just really pushed me into a depressive state. And I think that sheer despair kind of kept me trapped in the addictive process, or it didn’t keep me trapped but it was one of the factors.

I think one thing that I wish somebody were to have told me at that time is that there’s nothing that, I mean I don’t know a good way to say this but basically what I wish somebody would have communicated with me, and remind of all the ahadith where the sahaba, one by one, would come to the Prophet sal Allahu alayhi wa sallam saying that I’ve committed every single sin possible, and the Prophet sal Allahu alayhi wa sallam would still say, you know, there’s still forgiveness for you.

And one of the advice that you gave me, that really gave me strength to move forward and that is that I guess when you turn to Allah, like obviously, there’s going to be consequences to your actions and obviously, it’s going to be painful consequences but, because you’re doing it for the sake of Allah, you have a belief that whatever Allah subhaana wa ta’aala has planned for you, like that’s the best thing for you and it’s going to be good for you.

So instead of living a life where I kind of felt like my entire future was destined to be a depressive state or a despairing state, and this is what I deserve, and there’s no way for me to get out of this, this little black hole, but rather somebody, I wish I realized much sooner that listen, stop despairing, it’s okay, every situation can be fixed.

Every problem has a solution, yeah, it may be a little tough, but you have to understand that Allah subhaana wa ta’aala loves you and there’s nothing you could have done which, you know like, screwed you for life, and that there may be a few consequences but trust me when I say, only the best will come out of this, and Allah subhaana wa ta’aala will give you the best.”

Getting your life back together and repairing any damage done will be a process and will require you to take responsibility for your actions and make mends especially if it has offended or hurt others. This is a very part of that reliance on Allah’s Greater Plan for you.

No matter what happens or however dire circumstances may be you must never let the light of hope be extinguished from your heart. Never.

For those that are ready to take that brave step and join me I welcome you aboard.